On February 9, SPC’s Ethics in Action club chapters from the Clearwater and Gibbs campuses met for the first time at Moccasin Lake Nature Park for a night of lively conversation and debate. Seventeen people and one white throated monitor, compliments of Dr. Melissa Coakley, represented the two clubs at this event. 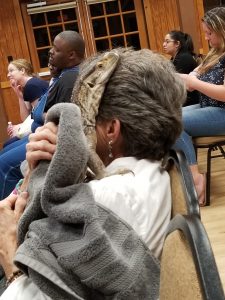 The evening began with some introductions, snacks and getting to know each other. Then we turned to ethical discussions, framed by clips of films and TV shows.

After watching The Orville, we considered ideas about parental choices that can affect the child (i.e. sex reassignment surgery at birth). A conversation ensued that included respectful disagreement and debate on solutions and problems included in the clip. This episode also lent itself to a discussion on epistemology, with the quote “confusing opinion with knowledge.” Another clip from this show illustrated that mistakes are meant to teach us how to be better, and how it is imperative that we learn from these mishaps. The clip showed a world where citizens are not given a second chance; if they make a mistake, the citizens vote whether to punish the individual. Some of us began to talk about learning from mistakes in terms of bullying – on both ends of the scenario. Learning from being a victim and learning from being the bully is equally important. This idea was even more emphasized when we opened up and spoke about our own experiences with bullying.

In Black Mirror, we looked at the potential of a dystopian future that could change the human experience, resulting in a lot of interesting comments and ideas. It also triggered a debate on the effects of Facebook, other social media outlets, and the effect of our cell phones on our daily lives.

The Matrix began a conversation of metaphysics and what reality truly consists of. We also reflected on relativism and false opinions for what may be “projected to us.” After a long, engaging dialogue, we came to a significant question: is murder always wrong? This caused a bit of a stir as a chorus of “yes” and “no” rang out. Though many would consider this response to be unfavorable, Ethics in Action clubs enjoy this kind of division, as it always leads to a great debate and sharing of different ideas.

It was a wonderful evening of comradery between the two Ethics in Actions chapters. It was, we hope, the first of many get-togethers between the clubs. Interested in the Ethics in Action chapters? Contact Dr. Melissa Coakley for the Clearwater chapter and Dr. Lee Miller for the St Pete/Gibbs chapter.