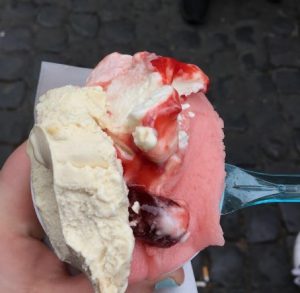 While in Italy, I tried many different Gelato flavors, including simple ones such as chocolate and vanilla and some less expected ones such as orange chocolate and lemon basil. The lemon basil flavor was not one that I picked, but one that fellow student, Gianna, let me try from hers. Without that flavor, I tried a total of 31 different flavors, my favorite being passion fruit, followed by mango. I did not try any gelato the first day there, which was Sunday. On Monday, I had chocolate chip and lemon the first time. I had chocolate the second time and it was my least favorite so far. On Tuesday, I had banana, vanilla, and strawberry. This time, the banana was my favorite. I had lemongrass, yogurt, melon, and dark chocolate on Wednesday. The dark chocolate was good but too sweet, the yogurt tasted like Greek yogurt, and the melon was my favorite out of these flavors. 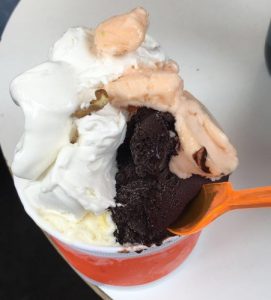 On Thursday, I got gelato twice. I got cream and coffee the first time and the second time I got cheesecake, caramel, pineapple, and watermelon. Out of all six flavors, the watermelon was my favorite one. On Friday, I had mango, coconut, and Nutella. Out of these three, the mango was my favorite and it was also my second favorite out of all the flavors I tried throughout the trip. On Saturday, I only got gelato once, but I could get as many flavors as I wanted since I bought one of the bigger sizes. I originally only wanted five flavors, but I said a wrong flavor and got it anyway. The six flavors I had were orange chocolate, which tasted like an orange tootsie pop. Raspberry, white chocolate, mint chocolate chip, cookies and cream, and passion fruit, which was my favorite one of all the flavors I tried. Sunday in Florence I had berry, cannoli, and almond, which I didn’t particularly care for any of them. Monday was the last time I got gelato and the flavors I got were kinder cereal, kinder egg, and mars.