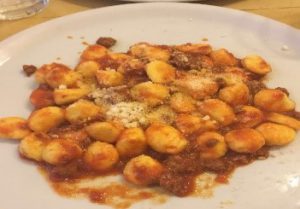 During my time in Italy, I tried different types of food that I have never had before. Three of these foods are gnocchi al ragu, bruschetta with tomato, mozzarella, and basil, and linguine seafood with grilled swordfish. The gnocchi al ragu was the first dinner I had in Rome and it set the bar high for all of my other meals. The gnocchi noodles were dense and very filling, but also kind of fluffy, something very different than anything I’ve had before. The noodles were topped with a red sauce that had beef in it and parmesan was added to the top of the pasta. 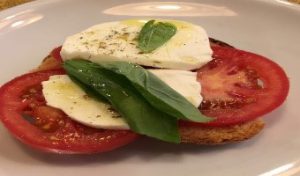 Though I had bruschetta multiple times throughout my stay in Italy, I didn’t have it with anything other than tomatoes until a little over halfway through the trip. When I got it with something more than tomato, I got it with mozzarella and basil in addition to the tomato and it was the best bruschetta of the entire trip. The bread was not too hard but not too soft, the tomatoes were very fresh and bright red, and there was a lot of mozzarella topped with basil.

When I was in Florence, I had the linguine seafood and grilled swordfish, which I never 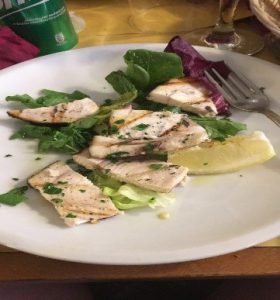 even knew about. The linguine seafood was a little spicy, making me like it even more because I enjoy eating spicy foods. The pasta had scallops, calamari, and other shellfish. The only thing that I wasn’t sure about eating in this pasta was the calamari because of the tentacles, but I tried it and it was amazing. The grilled swordfish may have been a different course, but it was part of my seafood meal and it may now be my favorite fish to eat. The fish did not have any bones and was precut when I received it, it was grilled perfectly, and tasted great with or without lemon juice.