It is almost impossible to pick just a few favorite art pieces from the country of Italy. While on my trip, I’ve seen almost every form of artwork imaginable! From sculpture, to mosaic, to painting, each piece of art had and individual purpose to offer Italy.

My first chosen art piece involves many sculptures which compose the Bridge of Angels. The Bridge of Angels originally was meant to link the castle and old Rome to the new Rome. After this, the Bridge became a piece of art work commissioned by Pope Clement IX. Pope Clement IX then hired Bernini who completed two of the angels which do not remain on the bridge. The point of bridge was to depict the passion of Jesus Christ within each of the statues. Each of the angels carries one of the elements of the crucifixion to walk each individual through the sacrifice of Christ. The angel in the picture shown is carrying the crown of thorns which Jesus wore as the Romans tortured him. Other angels held the sponge, the cross, and the crown of thorns (one of Bernini’s two sculptures). The reason this was one of my favorite sculptures is because it juxtaposes the beauty within the horror of the crucifixion of Jesus. It basically points out the heavenly and righteous meaning behind the dreadful and lowly deed that had to be done.

My second chosen art piece was the Sistine chapel, more specifically the ceiling itself. The ceiling of the Sistine chapel beautifully outlines the story of creation using vivid imagery. At the beginning of the ceiling is a picture of Jonah exiting the belly of the whale which is one of the greatest old testament stories. Following this are three images of God creating the universe and everything in it. The next three images illustrate God’s relationship with humans and how it became corrupted when Adam and Eve were banished from the Garden. The last three images involve the all powerful flood and Noah’s sacrifice after the flood. It also manages to sneak in a final image of Noah’s mistake which I personally love because it makes a biblical figure humanized. The ceiling ends with Zachariah one of the most renowned minor prophets of the bible. Personally, I love the initial images of the creation story because they are depicted in a way that is easy to understand yet allows room for contemplation. I also love the famous image of God creating Adam which is the two hands almost touching because it shows the intent of God creating each person in his image.

Beautiful works of art fill the cities of Italy and these were just a few.

As one would think the shopping in Italy was exquisite; one of my favorite locations for shopping was on the Tiber River. Every summer during the summer time, little white tents are set up all along the Tiber River where food, clothing, other vendors sell their goods. Each of the tents was unique and individual in comparison to the touristy shops which were located throughout Rome. One women handmade a design of a little girl cartoon on different clothing items which was absolutely adorable. Other places included unique pieces of clothing to Rome and other odds and ends. Personally, I was able to find some flowy shirts that were handmade in Italy for my sister and I, which were two of the most beautiful things I found on the Tiber.

However, the coolest thing about the tents were the pop up restaurants that sprouted on the side of the river. Each restaurant had its own theme and decorations while seemingly coming out of nowhere! It was insane to see so many completely made up restaurants that would soon be taken down and then set up the next year to come.

On the other hand, one of the most surprising things I saw on the Tiber was the amount of garbage scattered along the side of it. I would have assumed that because Rome is a tourist city the amount of garbage would be slim to none. Instead, there was more garbage on the side of the rivers than what I would see some of the beaches near my house. The amount of graffiti on the walls lining the Tiber also was shocking to me because it somewhat reminded me of NYC!

Funny, in a lot of ways Rome is kind of the NYC of Italy! 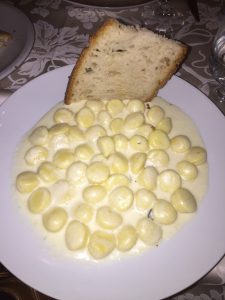 amous for its fantastic cuisine and wide selection of dishes. Of all the things I’ve tried so far, my first pick would be the Gnocchi. Unlike the United States, most of the pasta here is made from scratch. Gnocchi is basically little hand-rolled potato balls with either a red or cream sauce on top. My Gnocchi wasn’t chewy like the kind I would have gotten at a restaurant like Carrabba’s in the United States. Not only did the Gnocchi itself basically melt in my mouth, but the sauce was just the right consistency and richness. The restaurant itself was a charming little place with flowery fabric table cloths and black satin napkins. It also had several deserts that you can’t get in the United States that you could go look at through the counter and choose from!

My second favorite thing I tried was spaghetti with pesto. The pasta itself was cooked to perfection, not too hard and not too soft. Anytime I order a pesto dish in the United States it’s either too salty or too heavy, but this was not the case in Italy. Considering this dish probably originated here they know how to do it right! The sauce was cheesy and had proportional spices throughout. Again, this restaurant was a very tiny quaint place with a more casual atmosphere.

As seen in the pictures, there is only pasta on each dish. For American’s this may be confusing because we live in a supersized-bang for the buck type of society, but for Italian’s this is a normal custom. Any extra sides, soups, or salads have to be ordered separately and don’t come as part of the dish. This ultimately leads to less waste and less food consumption because individuals don’t feel obligated to finish everything on their plate or throw out what they don’t eat.

I always wondered why Italians took hours to eat their meals and now I know why! It’s because they have to savor every single magical bite and take in every  picuresque atmosphere. 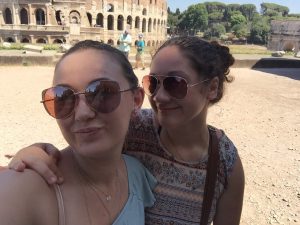 As the capital of Catholicism, Rome contains many monuments, building, statues, etc. of different important aspects to the religion. Aside from these religious sights, there are some more secular sights. One of the most brutish structures out of all the secular sights is the Colosseum. While touring the Colosseum I became aware that the Colosseum and its internal structures definitely were filled with color. This is something that intrigued me greatly because most of the ancient structures and statues that we view today are just white, but thousands of years ago they would have been covered in bright colors. This does not only stand true for the Colosseum, but for countless other pieces of history around Rome. An example within the Colosseum would be the gaudy wall hangings that covered the walls of the building. Each of these hangings would have been covered with color, but as time dragged on the colors disappeared leaving us with a bare piece of art.

Another interesting fact I didn’t know about the Colosseum was that it housed the homeless for several years while it was not being used. Each of the archways marked a new little room that individuals would sleep in while they had nowhere else to go. This meant that the Colosseum turned into somewhat of a safe-house for the homeless. It also struck me as odd that there even was a time when the Colosseum wasn’t in use. I always assumed that because of its extreme fame and glory that the Colosseum was always being used for the entertainment and frankly unethical behaviour of the people. However, it would be close to a thousand years before it would attempt a revival between its periods of usage.

The unethical behaviours that I mentioned in the previous paragraph were one of the final things that struck me about the Colosseum. During its first period of usage, the Colosseum would freely entertain thousands and thousands of people with several different types of events. The three main events were gladiator wars, beast fights, and a half time show which consisted of a show re-enacting certain scenes from history. In my opinion the most brutal of these were the re-enactments. Most of the scenes that were re-enacted from history consisted of one or more deaths which had to actually be played out on stage! Instead of having executions in the city (which was considered to taint the city and bring bad luck) the Romans would cast prisoners or criminals in the scenes and have them play the parts that died. That is one show I would NOT want to participate in!