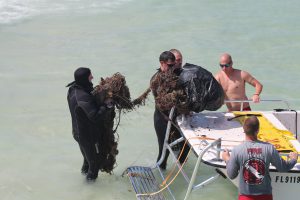 When these underwater surveys found that large amounts of old crab trap rope and fishing lines were becoming an entanglement hazard to marine birds, turtles and dolphins, Reef Monitoring began sponsoring artificial reef “Clean-Up” projects. Several of these reef clean-ups removed over 1300 pounds of old rope and fishing line. Later when these surveys began to observe the invasive lionfish becoming a problem on our reefs, Reef Monitoring began holding Lionfish Round-Ups. These round-ups are still removing thousands of these invasive lionfish every Fall.

In 2014, we approached the SPC grants office about a grant for the college to study several aspects of our artificial and natural reefs off of the Pinellas County coast. The staff at our grants office was surprised to find that the Florida Game and Fish Commission research grants could only go to State Universities and non-profit groups, not colleges. We then applied for a grant using Reef Monitoring Inc. to apply. This grant was for just under $18,000, and allowed our marine biology students to conduct extensive bi-monthly research dives on five local reefs, three artificial and two natural reefs.

Part one of this study was to determine what role these reefs play in larval recruitment of important fish species. To determine this, light traps were set overnight above the reefs by scuba divers trained in our SPC scuba program. The following morning, the divers brought the traps to the surface and the larval fish and the zooplankton were preserved. Once back on campus, the students used microscopes to identify and count the tiny fish and invertebrates collected in the light traps. Some of these organisms have never been described as being caught in light traps in the open sea.

Part two of this study was to make fish counts of the adult fish on each of these five reefs. These fish surveys are part of a continuing practice of the studies that Reef Monitoring Inc. has been conducting since 2011. They give us a “baseline data” to measure future changes in these reefs.

Part three of this study was to determine the impact of these reefs on the populations of small marine organisms that live buried in the sediment and make up much of the food chain. This study consisted of taking sediment samples from adjacent to the reef out 100 meters from the reef structure. These samples were preserved out in the boat, and when returned to campus, the samples were analyzed for particle size and analysis of the invertebrates collected. From this data, we are able to identify what organisms form this part of the food chain and compare biomass and species diversity of artificial and natural reefs communities. This study shows that these reefs influence the ecology of the sea floor over 100 meters from the actual reef structures.

This project gave our marine biology students not only invaluable experience in data collection in the field, but also experience in preparing the data for presentation before an audience of their peers. Much of this information gained from this study was presented at a public symposium on April 15, 2016 in the Fine Arts Auditorium on the Clearwater Campus, sponsored by Reef Monitoring and the Scuba Club. Several of our students who worked on this project are now employed as marine biologists with the state research lab in St. Petersburg.

I am now working with former Congressman David Jolly on an addition to
the Veterans Reef, an artificial reef off Dunedin shores started back in 1999. This new addition to Veterans Reef will be called a “Circle of Heroes” and will feature 24 life-sized
statues of military heroes in a circle on the sea floor ten miles out in the Gulf of
Mexico. In March, I obtained a small grant from the SPC Foundation to cover the total cost of the college scuba class, PEN22136, for five of our students who are veterans. The five student veterans who received the grants from the SPC Foundation have completed the college scuba class, and in the coming months will be placing small markers on the reef site to locate the spots for the military statues to be placed on the sea floor.

Dr. Lara and I will be enlisting new marine biology students in the fall for new research projects on the reefs off of the Pinellas County shores, as well as monitoring the
populations of marine life attracted to the new Circle of Heroes artificial reef. More
information about this Circle of Heroes can be found at brighterfutureflorida.org