“Seeing the Jewish Ghetto was one of the most impactful experiences of this trip .This was the day the group was introduced to Fabio, the wonderful tour guide we had the honor of learning from for two days. He was warm, informative and personable. Fabio really felt like a close friend instead of a guide. We strolled past what used to be the living quarters of the Jewish people living inside of the ghetto. Many families were cramped into one house that was too small for anyone to be comfortable. It was incredible to see so many examples of resourcefulness in an oppressed community. They found a way to live, eat ,and provide for themselves even with every odd stacked against them. In the ghetto, we were able to try some of the dishes traditionally eaten in that area. I was excited upon seeing different 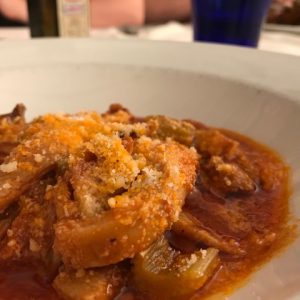 foods I had never tried and was dedicated to tasting each one . These foods included Oxtail, rabbit, and tripe . All three were incredible and I would definitely eat them again. This ties into international relations by exposing me to cuisine from not only Italian culture, but also Jewish culture.

Further, the cover photo (above) was taken after the Saint Peter’s Basilica dome climb.  Although this climb was 521 steps up, it did not feel difficult (or at least as difficult as the climb we took just a few days later in Florence). This could have been due to the cool breeze felt inside the climb. The steps varied from baby marble steps , to a spiral stairwell with a rope, and even ladder metal steps. I can’t imagine being a worker and climbing up these  steps having to add onto them. That must have been terrifying! One thing I noticed about Rome is how the locals really cater to the tourists. At some locations, historical landmarks started to feel like an amusement park, all ending with a gift shop. I see that these places need money for maintenance but this still takes away just a bit of the realness within these holy spaces. The amount of craftsmanship and artistry in everything is unimaginable. We got to the top point right as the bell rung in its tower. The bell could barely be seen . But it definitely could be heard. Bells go off every fifteen minutes in Rome and can be heard throughout the city. Sometimes I had these bells as a wake up call . This Basilica was my favorite because I was able to see the whole City of Rome. It was definitely worth the climb! 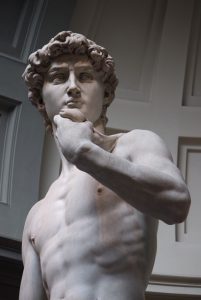 Finally, seeing the David was truly a breathtaking experience. Michelangelo was so ahead of his time and still is today! He was chosen to carve this statue at the young age of 26, which is a feat few could ever live up to. Two artists prior to him could not and would not carve this block as they said the marble slab was unworkable and had knots in it. However, years later it was made and I believe he was the best man for the job. Here we also learned about his unique carving style that was compared to a figure emerging out of a full bathtub. He didn’t make the sculpture, he found it . There are so many details but perhaps my favorite is the veins in his hand. This adds life and shows just how dedicated Michelangelo was as an artist. I am so glad I got to see this amazing artwork, especially at a time when there were only a few other groups in the room. If I were to recommend seeing only one thing in Florence, the David would be it!”- Athena Pantazes, SPC high school student, Italy 2018