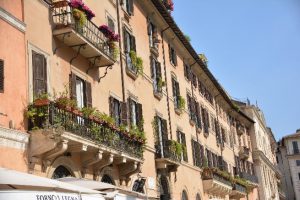 The top reason for why I wanted to go to Italy in the first place was the style. The art, the architecture, and my surroundings in general. During this trip, I have made note of the recurring style of Italy.

The everyday buildings on their own look different from what we have in the United States. For one thing, Florida is loaded with mosquitos and other bugs, whereas in Italy it is very hard to spot even a single fly. The windows have no netting, and they have flaps that swing open. Many residents like to leave plants outside of said windows, and some even hang their clothes outside. 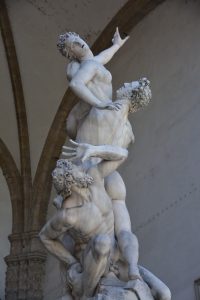 My favorite unique piece of architecture is the Colosseum. Not only is it super old, but it was home to many brutal brawls and often fatal fights, either by defeat or by an ordered execution. The architecture makes me think that it may have been used in future stadiums. The shape of the dome allows for a ring of seats around where the show would take place, with some class segregation involved as well. The Colosseum was ugly to the people in the Middle Ages, but I disagree. In fact, I heard it was quite beautiful at nighttime with the interior lighting.

Of course, I couldn’t forget the art. I was consistently amazed with the humanistic style of painting, sculpting, and crafting. Beyond all, my favorite piece of art was The Rape of the Sabine Women, by Giambologna. What I loved most about this sculpture was the fact that this was made of stone. 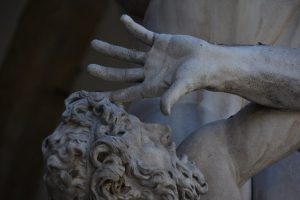 Just look at that hand. This man was chiseled with stone, and he has one of the smoothest hands I have ever seen. Another factor of this sculpture that I would like to commend is the composition of the three different people in the scene. They are posed so beautifully, but it looks so natural, so comforting, and it works.