This isn’t just for Swifties but you do have to be an SPC Titan.

St. Petersburg College students and alumni will have a chance to learn from some of the best – Dave Cook and Amos Heller – members of Taylor Swift’s band, The Agency. 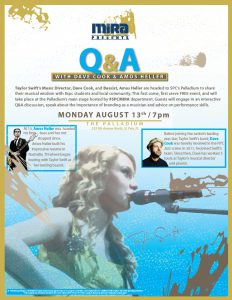 Among their many musical projects, Cook is Swift’s music director/keyboardist and Heller is her band’s “bass player extraordinaire.” The two are headed to the Palladium Theater at SPC on Aug. 13 to share their musical wisdom. Swift is performing in Tampa on Aug. 14.

This first-come, first-serve FREE event for SPC students and alumni will take place at the Palladium’s main stage. The event is hosted by the Music Industry Recording Arts program at the college. The program begins at 7 p.m.

Guests can take part in a Q&A with The Agency band members. Topics will include:

This is a return performance at SPC for the pair from The Agency band. The two took part in  a similar event in 2015 at the Palladium.

Before joining Swift’s team in 2011, Cook was heavily involved in the New York City jazz scene.  Since then, he has worked three tours as Taylor’s musical director and pianist.

At 13, Heller was handed his first bass. He hasn’t stopped playing since.  He built his impressive resume in Nashville where he began touring with Swift as her leading bassist.

MIRA has built a rich array of learning partners in the industry that connect manufacturers to students and faculty to provide:

One thought on “Get a lesson from The Agency band members”