For the first time, I produced and directed a summer musical at St. Petersburg College open to all area high school and college students. The response was really amazing.

Not only did we have two sold-out performances of the musical Fiddler on the Roof, but we had an amazing turnout of 50 auditioning students and 14 technical theater students.  I ended up casting 32 students in the production and was able to use all 14 technical students.  In five weeks, we put on a highly professional production of FIDDLER – built, painted, sewn, performed and put together by students.

What I was most interested in was what the high school students took away from this experience.  I had three sets of siblings involved with the musical. One set,  Alex and Haley Groth, were on both the technical (Haley) and acting (Alex) sides of the production.

I asked the two sisters:

Here were their responses and takeaways from the production.

Hi. My name is Alex Groth. I’m 17 years old, and I was a member of the chorus in SPC’s production of Fiddler on the Roof this summer.

After an insane school year in which I had participated in many productions, I was looking for a summer project that I could be a part of which would expand my knowledge as a theater person and help my growth as a performer.  When my teacher suggested being a part of this show, I wasn’t sure initially how the process would be when I auditioned, because I had no experience with the SPC Theater Department and only knew two other people who were auditioning.

I went into the experience completely blind, with limited expectations. I am so glad that I decided to take a leap and participate in the show because I could never had anticipated the ways I was able to grow as a performer and person.

Opening night Friday for Fiddler on the Roof at the St. Petersburg College Clearwater Campus! Support the high school &…

I was both excited and nervous to hear that I was cast in the chorus, because that meant that I had to put myself out there and go into an environment that I knew very little about.

I was instantly impressed by the level of professionalism and determination from both the cast and crew, as well as our directors. Every person involved had this drive and passion for the show, and we were able to learn the show quickly, without anyone holding us back.

I was at first a little hesitant about the time because this entire process was only five weeks, and Fiddler is a very intimidating show to do in that time period. But my fears were cast away as I realized that every single performer and crew member was ready to take on the challenge and did so with a hunger to learn more about theater and gain as much exposure to their theatrical field as possible.

The direction was so focused and to the point, I was never confused about what Scott wanted from me as a performer, which made the task of navigating through a huge show much easier.

I quickly became friends with an amazing group of people whose motivation pushed me to become better in every rehearsal. All of our hard work was rewarded with the best end result any of us could expect – two sold-out shows.

I learned so much about theater, but the most important thing this production has shown me is that you can maintain a high level of professionalism and be productive while having fun. And honestly, I believe this combination was vital to our success. Not only have I been able to become friends with some outstanding people who have the same passion for theater as I do, but I have learned so much by being a part of a college show, which taught me a lot about the expectations of a performer and how to fulfill them. 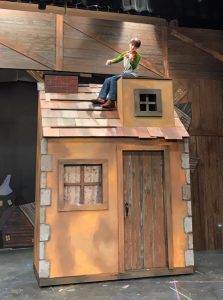 I have been involved in theater since I was a child, mainly focusing on the performance aspects of the medium. My view on the full production of a musical changed when I ventured into the world of technical theater during my freshman year of high school. Quickly I realized that acting on stage was only one part of the journey into creating an enjoyable show. It is not an afterthought, but rather an essential piece to the show’s complicated puzzle.

Upon learning about SPC’s upcoming production of Fiddler on the Roof, I knew that it was my chance to further my insight on technical theater and its impact on the totality of a production.

Throughout the five-week experience of creating Fiddler on the Roof, I gained knowledge unparalleled to my previous experiences. Instead of being stuck in one fixed position throughout the rehearsal process, I was able to actively have a mark on every technical area of the show.

In addition to learning about theater-specific topics, I learned valuable life skills that I can apply to my home as well as the theater, such as repairing and constructing –  I finally know how to use a screw gun! – and sewing and creating garments. Toward the end of the process I was assigned a fixed task (operating the lighting board) that I had never truly encountered in my school life. This focus area gave me detailed information to bring back to my high school in the fall. This program at SPC gave me the confidence to teach others in my school about how technical theater works and contributes to a show’s overall product. 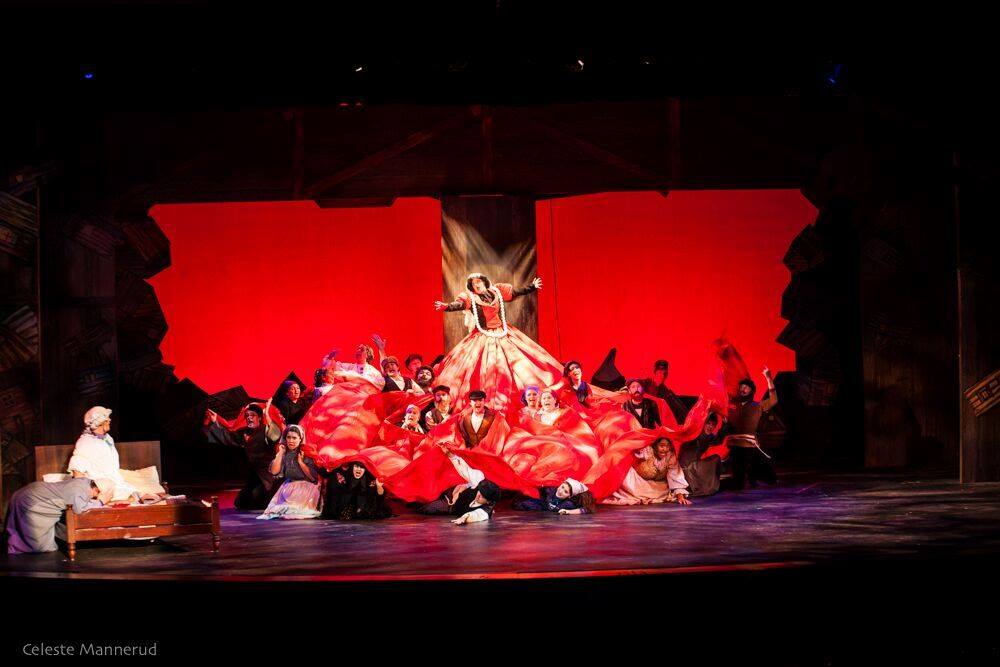 I didn’t only learn about technical theater and production, however. I also now understand what it feels like to work on a team. The 14 tech students and I were dedicated and friendly, allowing us to have a unified front and solve problems together. We learned from incredible mentors like Scott Cooper, Eric Haak, Adrian Puente and Celeste Silsby Mannerud about leadership and the qualities we must have to succeed in the theater and in the complexities of teamwork. Together we faced our fears – for me, going up on a lift and using a saw  – with immense support and help from each other. I now feel positive in creating a team and working together successfully wherever I go in my future.

Through understanding how basic elements of a production work, I feel like a more rounded and applicable student and “techie.” I urge everyone, technical students and actors alike, to foray into the world of technical theater in the SPC summer theater program. I will apply what I learned here to the rest of my life, inside and outside of the theater.

He has designed scenery for American Stage, Jobsite, Gorilla, Jaeb (Straz Center for the Performing Arts), Stageworks and FreeFall theaters in the Tampa Bay area. His work has also been seen at the Goodman and Steppenwolf Theaters in Chicago. He has received Creative Loafing’s Best of the Bay outstanding Scenic Designer in the Tampa Bay area for four consecutive years and recently received NORTON awards for best set design for AUGUST: OSAGE COUNTY at American Stage and ‘NIGHT MOTHER at Stageworks Theater.  He has been nominated twice for the Jefferson Award in Scenic Design in Chicago for his designs of BUS STOP and AMERICAN BUFFALO, both at American Theater Company. He is otherwise kept busy by being the head of the theater department for St. Petersburg College. He is a proud member of the United Scenic Artists Local 829.