Hollander, who has previously been featured on SPC’s Arts, Humanities and Design blog, is an accomplished musician who has opened for George Clinton and his Parliament Funkadelic. With Miroux, they have opened for bands like Young the Giant, and The 1975. Listen to a sampler of their music on Soundcloud.

“The MIRA program was essential in building us up, and helping us get on this stage,” said Hollander.

Rubbing shoulders with the stars 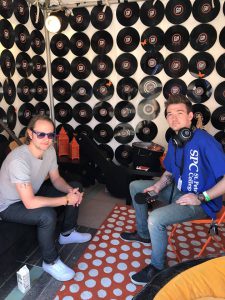 St. Petersburg College student Ben Kennett, a member of the SPC Radio Club, had the opportunity to interview Scott Anderson of Have Gun, Will Travel in the Orange Room backstage at the Gasparilla Music Festival. Have Gun, Will Travel’s music has been featured on shows like Roadtrip Nation, The Good Wife, and Expedition Unknown. Anderson was one of a number of musicians who sat for interviews in the backstage lounge that was created by students and staff. The festival gave students a chance to network and learn from music industry professionals.

While Miroux was playing the stage, many of their music instructors were across the park serving up the suds for a good cause. St. Petersburg College faculty and staff took up their battle stations in the bustling beer tent at the Gasparilla Music Festival to raise money for 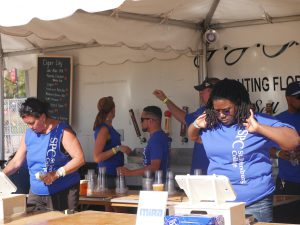 MIRA. This has been an annual tradition, raising money to help talented music students in need.

The two day festival spanning two parks brought thousands into contact with the best in local music along with Cage the Elephant and Ryan Adams. With more than 40 bands in genres ranging from gospel to blues to pop, there was something for everyone. Festival favorites included the Dirty Dozen Brass Band, Have Gun, Will Travel, and the Tampa Metropolitan Youth Orchestra. This year’s Gasparilla Music Festival was a great opportunity to celebrate and support Tampa Bay’s music scene, including artists from right here at SPC.