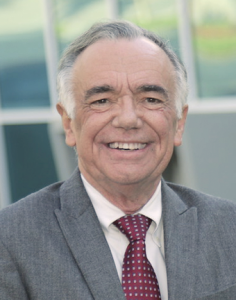 When Dr. John Chapin first began working at St. Petersburg College in 1977 as a founding science faculty member at St. Petersburg College’s Tarpon Springs campus, he noticed a problem. All of the science instructors at the different campuses were using different textbooks. Dr. Chapin saw this as a problem for students, and began work to streamline the curriculum. This was only the first of many contributions Dr. Chapin would make to the College.

Dr. Chapin, who rose to the position of Dean of Natural Sciences and retired in September 2016, passed away on Feb. 9 after a short battle with Lou Gehrig’s Disease.

“John’s death leaves a void for all of us who admired him and cared deeply about him,” said SPC President Bill Law. “We’ll remember John for his kindness, his depth of knowledge and his devotion to helping students succeed. John also leaves behind a profound legacy through the Bay Pines STEM Center opening this year. The innovative center, which John helped conceive, will serve thousands of students from SPC and Pinellas County Schools for years to come.”

Dr. Chapin’s life’s work was centered in Higher Education. He worked as a science faculty member and administrator at SPC until 1995, when he moved on to take a position as Associate Dean of Science, Health and Wellness at Montgomery College. He then became Dean of Math, Science and Allied Health at Polk State College. He later moved into a position as Vice President of Instruction at Guilford Technical Community College, then served as Vice President of Workforce Development at Tallahassee Community College before returning to St. Petersburg College in 2012 as Dean of Natural Sciences.

Lara Sharp, Program Director for Engineering Technology, said Chapin was an excellent role model and mentor, and noted his sense of humor and the care he showed his faculty, staff and students.

Professor Emerita and former Dean of Communications Martha Campbell worked closely with Chapin for years during both his tenures at SPC. Campbell called Chapin an innovator, and noted that it was he who won a grant to bring a DNA analysis lab to the college when the technology was still very new.

“He liked looking at various challenges from a number of different perspectives in order to help students and faculty,” she said. “He knew how to make things better and improve processes in learning situations.”

Perhaps Chapin’s biggest legacy at St. Petersburg College will be the Bay Pines STEM (Science, Technology, Engineering and Math) Learning Center, a hands-on science learning complex adjacent to the Intracoastal Waterway in Pinellas County. Campbell said Chapin was very excited about the Center, which will provide research opportunities for middle, high school and college students and a place for educators to obtain professional development, as well as being a community resource.

“He had great hopes for the Center because of what it would mean to students and the community,” Campbell said.

Chapin’s illness required him to retire in September, before the center’s summer 2017 opening, but his part in its inception will not be forgotten, as SPC’s Board of Trustees will soon consider naming the science labs at the facility in Chapin’s honor.

Dr. Chapin was also a bit of an adventure-seeker: He was a licensed pilot and also loved to sail and was a proud and involved grandfather.

“He wanted to spend as much time as he possibly could with his grandchildren,” Campbell said.

Dr. Chapin passed away peacefully surrounded by his family and his dogs. He is survived by his wife, Marcia, daughter Kristen Chapin Johnson and three grandchildren, Joye, Kort and Hailey Gilbert. The family will plan a celebration of Dr. Chapin’s life in the coming weeks.