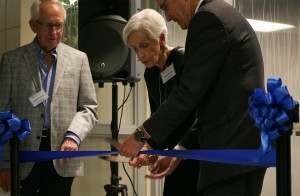 This week, St. Petersburg College honored Dr. Vilma Zalupski for her dedication to the college, even into her retirement, and her continued support of Women on the Way, the college’s resource and support center for female students.

About 50 college administrators, faculty and students gathered Tuesday, Jan. 26, at the Clearwater Campus to take part in a reception for Zalupski. The event also served as a dedication where the campus’ WOW center was renamed in her honor.

Zalupski holds strong ties to the college. Her rise to the top began with a degree in counseling that led her on a path to become the college’s Dean of Women. Later named Clearwater Campus Provost, she is the first woman in Florida to have served as a community college provost.

Working closely with Women on the Way in its infancy, Zalupski has seen it grow into a program able to change the course of women’s lives. Even though she is now retired, she remains a WOW benefactor.

“I live in Tampa. If I lived closer… I would volunteer. But I do what I can. You know what they say, ‘Old soldiers never die’,” Zalupski said.

One thing WOW promotes is interconnectedness. That is, the ability to come together and achieve success through the help and determination of others.

“Working within WOW, and my career in general, I always made it a point to know everyone: how many kids they have, what they are going to school for, their hardships,” she said. “That general interest kept me connected to what was important.”

Words that have inspired Zalupski in her mission to help others: “It is in identifying yourself with the hopes, dreams, fears and longings of others that you may understand them and help them.” – Wilfred A. Peterson (Art of Awareness), March 2005

To Zalupski, WOW offers women a way to succeed beyond their expectations. Through scholarship initiatives, clothing programs and general support, the program offers students a shoulder to lean on.

“I know plenty of women who would not be able to go to school full time without the help from scholarships that WOW has given us,” said Rebecca New, an SPC WOW member and education major.

Some of the other unique opportunities WOW has given students involve textbook lending, workshops, class planning and access to resources for tutoring, housing and shelters.

And it does not stop there.

“They do this thing called Adopt-a-Family for Christmas,” New said. “The ladies in WOW literally bought my son a bike!”

SPC President Bill Law said WOW is a shining example of the college’s message to and goal for its students.

“The school promotes out-of-class support, interaction and help, as well as a genuine college experience to give students a push towards success,” Law said. “WOW is the best example of that model.”

Law reiterated that a plan is in place to put a WOW center on every campus.

WOW already has expanded to SPC Midtown, said WOW Coordinator Shirley Crumbley. The organization is scheduled to get centers at the Seminole, St. Petersburg/Gibbs and Tarpon Springs campuses by 2017.

As a leading lady behind WOW’s success, Zalupski feels it is a dream come true to see the program expand.

“Without her, WOW wouldn’t be as strong as it is today, and without her I probably would not have stayed at SPC for my bachelor’s,” New said.